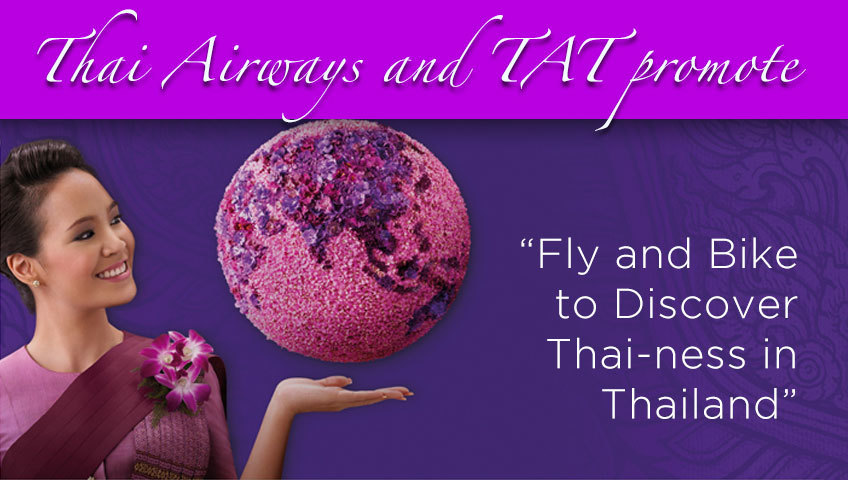 Thai Airways International and the Tourism Authority of Thailand (TAT) have joined forces to promote the “Fly and Bike Thailand: Discover Thai-ness” campaign. It is part of the TAT’s “Discover Thai-ness” promotion. The campaign, to promote touring of the country by bicycle, was launched in Bangkok on the the occasion of His Majesty the King’s 87th birthday, with a bike parade of 999 cyclists.

Thai Airways is now offering promotional fares beginning at 1,050 BAHT, for those traveling with their bicycles to specific locations within Thailand. Tickets are now on sale through September 30, 2015, for departure dates of April 1 to September 30, 2015. Five routes are eligible for this discounted fare: Bangkok to Phuket, Krabi, Khon Kaen, Chiang Mai, and Hat Yai.

In addition to the above discounted rates, Thai Airways has added a pre-sale 2015 promotion, offering discounts on other special advanced purchased tickets. This discounted rate will apply to those customers flying weekdays on specified domestic routes.

The “Pre Sale 2015” promotion is for passengers flying from Bangkok to Phuket, Krabi, Khon Kaen, Chiang Mai, and Hat Yai, with ticket fares starting at 1,090 Baht.

A few months ago, the Thai Cabinet announced approval of a tourism campaign called “Amazing Thailand: 2015 Discover Thai-ness.” The objective is to increase tourism income, to promote Thai experiences, the Thai lifestyle and the Thai culture.

In addition to the “Fly and Bike Thailand: Discover Thai-ness” campaign, TAT is targeting specific countries with promotions to increase international tourism to Thailand, including the United States, Italy, China and India.